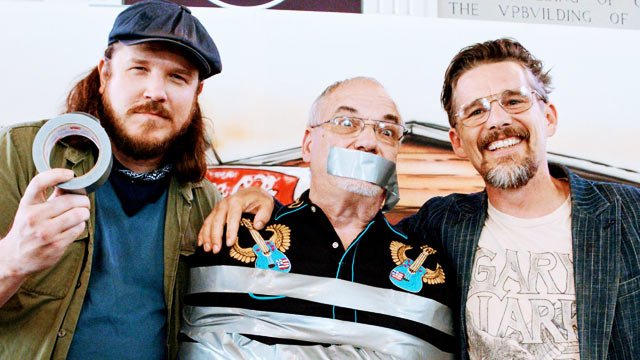 Well, Mintz is actually former 101 KLOL promotions guru Doug Harris. You know, the guy who helped come up with some of those wild radio promotions like crashing a Corvette through a billboard?

Harris, who still puts on his film critic hat as Mintz, just got a chance to interview four-time Academy Award nominee Ethan Hawke for RFC Media’s “Made in Texas Radio” and things got very sticky. More on that in a minute.

Hawke was promoting his new movie Blaze with Ben Dickey, the musician making his acting debut playing the late Texas songwriter Blaze Foley, who the film is about.

According to Wikipedia, Foley made duct tape his trademark. He would place the tape on the tips of his boots to mock the silver-tipped boot craze made famous by Urban Cowboy. Eventually Foley even constructed a suit made out of the grey tape.

Noting the singer/songwriter’s odd affection for duct tape, Mintz/Harris showed up with a few rolls of tape and asked the pair to autograph them.

Hawke and Dickey had other ideas and a good time was (mostly) had by all.

Fans of the Texas outlaw sound take note: all of the music in the film is by Blaze Foley, Townes Van Zandt and Ben Dickey.

The original cast soundtrack is forthcoming from Light in the Attic Records.